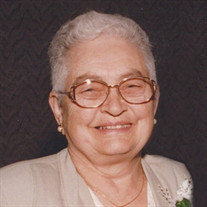 Wilma J. (Stowe) Dame died early morning, October 16, 2021, peacefully in her sleep. She was 96 years young. She was born and raised on a farm in Omena Michigan, to parents Frank & Pearl Stowe, along with siblings Frank Jr. & Geraldine. She loved horses, and in the late '50's was the Parade Marshall for the Michigan Cherry Festival Parade held in Traverse City annually. Wilma was married to Cleland Dame, from Northport. They spent their honeymoon in Niagara Falls, then life together downstate, 54 years of it in the Utica / Washington area. They actively RV'd during the summer, and often took camping trips with with Wilma's siblings & their spouses, traveling around approximately 2/3 of the continental United States & much of southern Canada. A severe wreck in 1992 left them physically unharmed but unfortunately ended their desire to pull a trailer & go camping anymore. Wilma spent 48 years breeding & showing dogs. She got her start in 4H, and would go on to become a household name with those involved with Schipperkes & Australian Cattledogs. This was due to many of her dogs accomplishing so many degrees, awards, & Championships from the American Kennel Club, National Kennel Club, & Canadian Kennel Club, in obedience, breed showing, fly-ball meets, tracking trials, & agility competitions. She was a pioneer in those competitions beyond obedience, taking her Australian Cattledog called "Mattie" to the point of being the most awarded dog of it's breed in the USA. Many of her Schipps also reached elite statuses in both the United States and Canada, with endless HIT's, ribbons, trophies, & awards. Her fame in the dog world was supported by TV & radio appearances, and articles in many newspapers & magazines, as well as appearances in books. Sadly, many of these rewards & memories would be lost in a house fire that fortunately spared all human & dog lives in December 1994. Throughout her life Wilma was also a creative crafter, with skills in sewing, knitting, crocheting, latch hooking, macramé, miniature clown making, and lawn chair weaving. Wilma is survived by: Her loving husband of 62 yrs., Cleland; Her daughter, Colene (Craig) Nichols; Her son Greg (Sue) Mills, and son Rex (Bonnie) Dame. Additional descendants include 6 grandchildren, 10 great grandchildren, & 7 great great grandchildren. She was proceeded in death by: Parents Frank & Pearl Stowe; Sister Geraldine Pomranky; Brother Frank Stowe; first husband Ervin Mills; and granddaughter Danita Sopha. Also waiting for her over the Rainbow Bridge are her horses Meschak, Flicka, Misty, Ginger, Champ, and Trigger; Siberion Husky Pooka; Poodles Amber, Tammy, & toy poodle Dawn; Schipperkes Kricket, Freddy, Pepper, Bubbles, Raizen, Angel I, Angel II, Spirit, Buddy, Dori, and Kimi; and her super dog, Australian Cattledog Mattie. Happy trails to you Wilma. Visitation Friday 3-9pm with 7:00pm Sharing of Memories at Wujek-Calcaterra & Sons 54880 Van Dyke at 25 Mile (Shelby Township). Share memories with the family at their "On Line Guest Book" @ WujekCalcaterra.com.

Wilma J. (Stowe) Dame died early morning, October 16, 2021, peacefully in her sleep. She was 96 years young. She was born and raised on a farm in Omena Michigan, to parents Frank & Pearl Stowe, along with siblings Frank Jr. & Geraldine. She... View Obituary & Service Information

The family of Wilma Jane Dame created this Life Tributes page to make it easy to share your memories.

Send flowers to the Dame family.