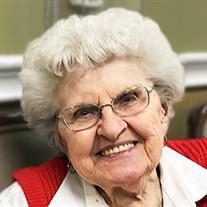 HERMAN, Wanda S., August 29, 2021 Age 97. Beloved wife of the late Edmund. Loving mother of Debbie (Michael) Counts, and the late Patricia Andelean. Proud grandmother of Matthew (Christina), Kelly Andelean, Adam (Rachael), and great grandmother of Anna, Aiden, Dean, and Nora. Predeceased by her siblings Irene and Frank. Wanda Sophie (Porembski) Herman was born in Hamtramck Michigan where she grew up with her parents and two siblings, Frank and Irene. She married Ed Herman on June 22, 1946 and in 1948 they built a home and moved to Roseville Michigan where she then lived almost 70 years. She was a homemaker and had two daughters, Patricia and Debbie. She was a baker, a bowler, and pinochle player. She was proud to be grandmother to Matthew, Kelly and Adam. One of her greatest titles, however, was when she took on the title of “Granny” and became a great grandmother 4 times. Anna, 11, Aiden 9, Dean 3 and Nora, 4 months old. She spent much of her time, especially as her children became adults, with Sacred Heart Church. Not only devoted in her faith, but as a eucharistic minister, alter society member/ officer as well as assisting with festivals and funeral lunches. She was well known in the parish and her baked goods were the hit of the bake sales that were held after masses on the weekends. At the age of 91 she moved from her home in Roseville to the American House Sterling Meadows and this became her new community until her death this past weekend. There she played pinochle, bingo and bunko and participated in many functions until she was unable to do so. Although no longer able to assist in parish activities she supported St. Pio Parish in Roseville, Michigan and attended Mass until decline in health made her unable to do so. But her faith remained strong even after she was unable to attend mass in person. Her weaknesses were sweets, and she was known to eat desserts at breakfast, lunch and dinner. Ice cream was her favorite food which she enjoyed until her passing. She suffered from macular degeneration and has received treatment for 20 years to help maintain her sight. Her biggest hope was to maintain some vision and not be blind when she died. Thanks to Doctors and staff at Fraser Eye Care although her vision had declined she was able to see until her death. She was supported by the American House staff, Advisa Care staff (they called her Wandabell) and Compassus Hospice. Because of these wonderful organizations' staff she was able to stay in her apartment, have continual company and feel loved by many . Visitation Thursday 4-8pm with a 7pm Rosary service at Wujek - Calcaterra & Sons Inc., 36900 Schoenherr at Metro Parkway (16 Mile Rd). Funeral Friday instate 10:30am at St. Pio Catholic Church 18720 13 Mile Rd until time of Mass 11am. Interment Resurrection Cemetery. Memorial contributions in Wanda's honor are appreciated to the BrightFocus Foundation for Macular Degeneration Research (https://support.brightfocus.org/default.aspx?tsid=9569&_ga=2.205399376.1766295343.1630414588-2100803451.1630414588). Please share memories with the family at their "On-Line Guest Book" @ WujekCalcaterra.com.

The family of Wanda Sophie Herman created this Life Tributes page to make it easy to share your memories.

Send flowers to the Herman family.