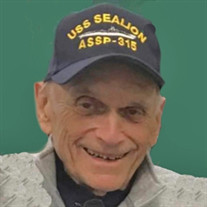 WARING, Wallace Earl, passed away peacefully on Saturday, November 27, 2021. He was a dedicated family man and he will be dearly missed by all who knew him. Wallace is preceded in death by his parents Earl Waring and Clara Proulx Waring, along with his brother, James Waring, and sister Rosemary Waring Reid (Robert). He is survived by his wife of 61 years, Janice; his four children: Thomas, James (Laurie), David (Holly) and Amy; his seven grandchildren: Jamie, Jessica, Alyssa, Jonathan, Taylor, Michael and Matthew; his eight great-grandchildren: Alexa, Mason, Alaina, Kacen, Braden Wallace, Hadleigh, Joshua Wallace and Madisyn. Also survived by his loving in-laws, cousins, nieces and nephews. Wally was a gifted thinker, communicator and teacher. A true leader by example and a kind human being. Wally was an active participant in his magnificent life and shared a true love story with his wife Janice. Throughout their lives together they shared a robust and happy family life, whether going "up north" to their lake cottage, visiting their condo "down south" or travelling the world with brothers, sisters and in-laws. Wally sincerely enjoyed and valued his friendships and he loved his children, adored his grandchildren and cherished his great-grandchildren. Wally was born in Detroit, Michigan. In his early years he had a Detroit Times paper delivery route, was very active in sports (baseball), music (clarinet in marching and concert bands) and the Boy Scouts of America, teaching young men to become Eagle Scouts. After graduating from Denby High School he worked for S.S. Kresge Company and Aetna Insurance. Wally then proudly joined the United States Navy and served as a submariner on the USS Sealion Submarine with wartime military service between 1948-1952 during the Korean War. Upon honorable discharge from the United States Navy, Wally began to pursue education as a career. Studying at the University of Detroit then earning his Bachelor's Degree at Wayne State University, where he also earned a Master's Degree in education. Wally's first teaching assignment was at Goodale Elementary School where he met another teacher who would become his wife, Janice Seavoy Waring. Over the next 30 years he taught at several schools and on several levels, mostly in the Detroit Public Schools: Denby High School, where he served as a teacher in adult education for many years, Osborn High School, where he lead a team of students to win the Quiz Bowl Championship on television for the city of Detroit, Trix Elementary School, Pere Gabriel Richard Elementary School and the Roeper City and County School for the Gifted. Wally spent a large portion of the second half of his teaching career in special education. He also served as President of the St. Brendan's Parish Council, where his children attended school. After retiring from teaching in 1987 Wally built his own carpentry/wood shop and crafted wooden carvings for the Christmas holiday season. His creative nature had him also writing short stories on various experiences in his life. Wally then found a second career that he loved working as a historical interpreter at Wolcott Mill of the Huron-Clinton Metroparks Authority. His presentations there became legendary. 24 years later he retired from that position to enjoy spending time with his wife, family and friends. Wally positively influenced many throughout his entire life. He was a strong, magnetic man, a man of faith, and a bright shining light to his family and to the world. He will be dearly missed. God bless Wally and may he rest in peace. Visitation Friday, December 17 from 5-8pm at Wujek-Calcaterra & Sons, Inc., 54880 Van Dyke (at 25 Mile Rd.), Shelby Township. Instate Saturday, December 18 from 9:30am until time of 10am Mass at St. Kieran Catholic Church, 53600 Mound Rd. (S. of 25 Mile Rd.), Shelby Township. Entombment with military honor rendered by the United States Navy, Christian Memorial Gardens West, Rochester Hills. Memorial contributions are appreciated to the Navy-Marine Corps Relife Society (www.nmcrs.org). Please share memories with the family at their online guestbook at WujekCalcaterra.com

WARING, Wallace Earl, passed away peacefully on Saturday, November 27, 2021. He was a dedicated family man and he will be dearly missed by all who knew him. Wallace is preceded in death by his parents Earl Waring and Clara Proulx Waring, along... View Obituary & Service Information

The family of Wallace Earl Waring created this Life Tributes page to make it easy to share your memories.

Send flowers to the Waring family.