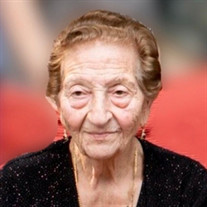 Vittoria (Spadafora) Bava, was born on October 22, 1927, in the mountain village of San Giovanni in Fiore, Cosenza in the Calabria region of Southern Italy. She was the 5th of 6 children born to her parents Vincenzo and Teresa Spadafora. She spent her early life on a farm until she met the love of her life, Antonio Bava. They became happily married in 1945. A year later her first son Bernardo was born, which began her lifelong dedication and singular focus in being a mom and caregiver. Her heritage and roots in a small town, where everyone knew each other and looked out for each other, contributed to her lifelong compassion for others. In 1958 her family of Vittoria, husband Antonio, son Bernardo (1946) and daughter Rosa (1955) emigrated to Mulhouse, France with the ultimate goal of reaching America. Like many others of the time, she and Antonio were deeply committed to providing opportunity for their children beyond their current circumstances. Sooner than expected, they made the move to America in 1961, travelling through Ellis Island on their way to Detroit, Michigan. They established their roots and prospered in the region. They settled around many dear friends and family in Michigan and Canada. Four years into their new life on a different continent, her youngest son Roberto arrived in 1965. Vittoria and her husband always lent a helping hand to family and friends. Her hospitality didn’t have bounds. She provided a home for friends or family immigrating to America in need of a temporary landing spot and the comfort of a familiar face in a foreign country. Vittoria spoke heavily accented English, which produced many humorous situations over the years. She was first to laugh at her speech, especially when friends with even less command of the language called on her for translation support. Despite limited education and lacking complete command of formal English, she was an excellent communicator and friend to people across continents and over the course of decades. It was a routine part of her life to manage time zones and a budget to make regular phone calls throughout Europe to stay in touch with friends and family. Seemingly uncommon now in this era where neighbors keep a friendly distance, it is remarkable that Vittoria has friends that began as neighbors across decades, countries and towns. Her generosity was extended to the mailman, plumber and anyone else open to conversation and maybe a glass of homemade wine. Vittoria took great pride in her traditional role as homemaker and caretaker of the family. Her homes rarely had wall space that weren’t occupied by pictures of friends and family. She was a fierce protector of all her family and friends. She woke each day with a plan on how to best support her family. She couldn’t rest until she knew they were fully taken care of. She ensured that her children took advantage of every opportunity afforded them and set high standards for them. Her natural and effortless motherly instincts were extended to others as well. She was called Mom or Nonna by so many who weren’t blood related. Vittoria and Antonio had true unconditional love. They were devoted to each other and were rarely apart until Antonio’s passing in 2011. The loving home they built extended to their grandchildren Antonio 1986, Vittoria 1989, Alyssa 1993, Sabrina 1996, and Grace in 2003, who brought tremendous joy. She reveled in their growth and accomplishments. She also loved Rosa’s husband Victor and Robert’s wife Giovanna, who were always close by to return their love for her. More recently, she was thrilled to welcome and love Salvatore and Kieran, as they married her granddaughters Vittoria and Sabrina. A most common refrain from those who knew her was that “she was a strong woman.” Indeed, she was physically, spiritually, and emotionally strong. At over 90 years old, she could be found cleaning flower and garden beds in her large backyard with her cane 10 yards behind and her walker even farther back. Hands-on work gave her energy that was only second to being around her friends and family. She was a believer in God and Jesus Christ our Savior her entire life. Her emotional strength was admirable and something others leaned on. God and the angels called her on February 2, 2022, at the age of 94. She died after a brief illness surrounded by her beloved Son, Grandchildren and friends. She was predeceased by her parents Vincenzo and Teresa (Caputo) Spadafora, brothers Antonio (Vittoria), Giuseppe (Caterina) and Giovanni (Barbara), and sisters Teresa (Antonio) and Rosa Sacco (Alesandro). She is also predeceased by her son Bernardo and Daughter Rosa Valenti (Victor). She is survived by her son Roberto (Giovanna); grandchildren Antonio Valenti, Vittoria Amodeo (Salvatore), Alyssa Bava, Sabrina Hall (Kieran), Grace Bava, and Son in Law Victor Valenti; also many nieces and nephews. Visitation Monday 3-9pm at Wujek-Calcaterra & Sons, Inc. (Shelby Township) 54880 VanDyke at 25 Mile Rd. Prayers & Memories 7:00pm. Instate Tuesday 9:30am at St. Kieran Catholic Church until Mass, 10:00am. Entombment Guardian Angel Cemetery.

Vittoria (Spadafora) Bava, was born on October 22, 1927, in the mountain village of San Giovanni in Fiore, Cosenza in the Calabria region of Southern Italy. She was the 5th of 6 children born to her parents Vincenzo and Teresa Spadafora. She... View Obituary & Service Information

The family of Vittoria Bava created this Life Tributes page to make it easy to share your memories.

Send flowers to the Bava family.