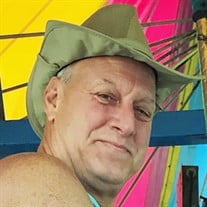 Thomas Michael Capizzo age 65 of St. Clair Shores, Michigan entered eternal life on August 28, 2021. His spirit is carried on by his son Thomas F. (Sarah) Capizzo; granddaughter Joan Capizzo; his parents Frank and Doris Capizzo; six siblings Jim Capizzo, Mark (Kimberly) Capizzo, Peter (Glenda) Capizzo, Dale (Lynn) Capizzo, Ann Jenkin and Kevin Capizzo; former wife Dolores Duff; and many nieces and nephews along with great nieces and nephew. When Thomas M. Capizzo was young, he worked at Viviano Flower Shop where he learned the value of a hard day’s work. He graduated from Austin High School (Detroit, MI) where he played basketball and football. In his early 20’s, he worked security at the Renaissance Center (which he always said was his favorite job). He obtained an associate’s degree from Macomb Community College. He also attended classes at Wayne State and almost finished, but better things were to come. He had a son and decided to go into business with his brother Mark; the two of them started T&M Construction. Later on, the two parted ways and Deerbrook Construction Co. was founded. He proudly ran the business for next 30 years, until passing on his love of concrete and masonry to his son, now owner of the business. He retired at the age of 60. At 6’5.5”, “Big T” was a mountain of a man, as well as generous and thoughtful beyond measure, loved by all who his path would cross. If he met you once, he wouldn’t forget you. During his lifetime Big T built two of his personal homes. He enjoyed reading, home projects, riding his bike, visiting parks, and spending time at his cottage in Lexington, MI. Thomas is reunited with his late wife Patricia (Tompkins) and is in heaven striking up plenty of meaningful conversations. Memorial visitation Tuesday September 7th from 3-8pm and a Memorial service Wednesday September 8th at 11am at Wujek-Calcaterra & Sons 36900 Schoenherr at Metro Parkway (16 Mile Rd). In lieu of flowers, the family asks that donations be sent to Six Feet Over at https://secure.givelively.org/donate/six-feet-over/in-memory-of-thomas-michael-capizzo . Share memories with the family at their "On-Line Guest Book" @ WujekCalcaterra.com.

The family of Thomas Michael Capizzo created this Life Tributes page to make it easy to share your memories.

Customized sympathy cards. Mailed for you.