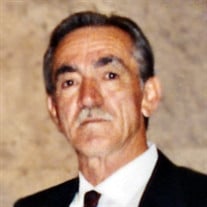 DEDVUKAJ, Shtjefen Gjeku, Age 85, of Bloomfield Hills. Passed away peacefully Monday morning, May 23, 2022, surrounded by his family. He is survived by his wife of 61 years of marriage, Agja and leaves six children, Nua, Joseph, Luigji, Zef, Gjon and his daughter Hana. Daughter in laws Ilda, Violet, and Tricia. Eight grandchildren; Nita, Alex, Emma, Jaclyn, Kristina, Robert, Gabrielle, and Leonardo. Predeceased by his siblings Nika, Gjergj, Preta, Lena and Marja. Shtjefni was born in Bardhaj Te Hotit, Malsi E Madhe, and immigrated to the United States on May 10, 1968, with his wife and five children at the time. His was one of the first families to immigrate from Albanian highlands of "Malsia e Madhe", and made such a positive impact in his family and the Albanian world. He will always be remembered by his unwavering commitment to Michigan, the Albanian community, his generosity to others and his devotion to his family and friends. In 1973 he lost his first job at General Motors when he refused to work overtime on a Saturday because he felt a moral and patriotic obligation to attend a meeting to organize Albania's Independence Day celebration in Michigan. The Albanian Independence Day celebration became an annual event to this day. His Jewish friend, in GM management, got him a new job at General Motors in 1974, where he worked until his retirement. Although he barely had a 4th grade education, he was a dedicated activist in the Albanian American community all of his life and was one of the original founders of Saint Paul’s Albanian Catholic Church. Like any great leaders, he was always looking ahead, and appreciated the importance of cultivating the Albanian culture in a multi-cultural society. Shtjefni was a true leader and was also one of the proud organizers of "Kryengritja e Malsis Madhe", an ongoing annual celebration for the past 43 years, commemorating the sacrifices and valor at the battle Decic for Albania's independence. During his activities in America, he always gave generously for Albanian national causes and often participated in demonstrations for Albanian rights in Kosova, Macedonia and Montenegro - He believed that every human had a right to live in dignity. As a trusted "Anti-Yugoslav" Albanian patriot, and was one of the first Albanians in diaspora to visit communist Albania in 1984. In 2003, he was part of the delegation from Michigan to take part in beatification of Saint Mother Teresa where she reached the ranks of the blessed in what was then the shortest time in the history of the church. Saint Mother Teresa was canonized by Pope Francis I on September 4, 2016. After 30-years of working on the assembly line, he retired from General Motors in 1997. In his retirement he worked for many years on various Albanian causes and hosted U.S., Congressional representatives over the years to make sure they heard the voices of the Albanian people. Mr. Dedvukaj was known for his trust and diplomacy as a close family relative of Albania's honored revolutionary hero, "Ded Gjo Luli". He spent his time with his children and grandchildren after his retirement and loved to travel and take family vacations until he developed throat cancer in 2010. He survived throat cancer, but lost his voice box during surgery. He still enjoyed watching Albanian TV and enjoyed attending Saint Paul's church regularly until he was physically unable. Dad (who we affectionately called Babic) would often spend time meeting with friends and family and looked forward to weekend get togethers. He loved family gatherings and enjoyed driving a car. Dad will always be remembered as the family's loving forefather with the foresight and courage to take the journey to America with only the clothes he was wearing, his wife at his side, and five children in tow at the time. Dad was a loving husband, a very dedicated father, and a caring grandfather. May he rest in eternal peace and his legacy live on in this Great Nation. Praise be to the Lord. Amen. We Love You Dad. Visitation Friday, May 27, 2022, from 2pm until 8pm at Wujek - Calcaterra & Sons Inc., (Shelby) 54880 Van Dyke Ave at 25 Mile Rd. Instate Saturday, May 28, 2022, from 9:30am until time of 10am Mass at St. Paul Albanian Catholic Church, 525 W Auburn Rd., Rochester Hills, MI 48307. Entombment with memorial tribute will be following mass at the "Shtjefen Dedvukaj Family Estate", located at Resurrection Cemetery, Clinton Township, Michigan. Please omit flowers, memorial contributions may be made to St. Paul’s Albanian Catholic Church, 525 Rochester Road, Rochester Hills, MI.

DEDVUKAJ, Shtjefen Gjeku, Age 85, of Bloomfield Hills. Passed away peacefully Monday morning, May 23, 2022, surrounded by his family. He is survived by his wife of 61 years of marriage, Agja and leaves six children, Nua, Joseph, Luigji, Zef,... View Obituary & Service Information

The family of Shtjefen Gjeku Dedvukaj created this Life Tributes page to make it easy to share your memories.

Send flowers to the Dedvukaj family.