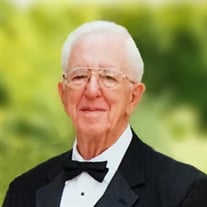 Salvatore J. Ciaravino, age 92 of Grosse Pointe Woods, Michigan, peacefully passed away in his home on August 11, 2021, surrounded by his loving wife and children. He was born in Detroit, Michigan on September 30, 1928 to John Ciaravino and Frances (Coppola). He is survived by his wife of seventy-one years, Josephine (Montallegro), their seven children, John (Cynthia), Frances (William Solomon), Vito (Kimberly), Benita (Joseph Theis), Joseph (Linda), Mark (Elizabeth), Paul (Theresa), 23 grandchildren, 21 great-grandchildren, his beloved sister Mary (Partyka), the late Vito W. Ciaravino and by many loving nieces, nephews and cousins. For Salvatore, family was his priority and faith was his strength. He instilled in his children positive moral values and faith in his Savior Jesus Christ. He made every effort to be home each evening for dinner, praying together as a family at night and attending Mass on Sunday. Salvatore and Josephine loved raising their children, and watching their grandchildren and great-grandchildren grow. He loved his family and dedicated himself to caring and providing for them while living out the love of God for others in all that he did. Salvatore graduated from De LaSalle High School in 1946. In 1947, he enlisted in the United States Navy, attended basic training at the Great Lakes Naval Station and studied at the U.S. Navy School of Music in Washington, DC. He spent the remainder of his military commitment as a member of the US Navy Band stationed at the US Naval Air Station in Corpus Christi, Texas, playing saxophone and clarinet through 1951. After his service and duty to his country, his professional career started with the newly automated accounting department at the Michigan Natural Gas Company. After several years with Michigan Natural Gas, an opportunity to join the John Hancock Mutual Life Insurance Company was offered to him. He remained there until his retirement. His success in business was manifested by demonstrating professional proficiency, kindness and a genuine concern for others. Salvatore had a way of placing everyone at ease with his good-hearted nature and pleasant conversations. Salvatore was a sixty-year parishioner of St. Joan of Arc Catholic Church in St. Clair Shores, Michigan, where he was actively involved in serving others as a lector, providing leadership in the resettlement of a refugee family, as a member of the parish Christian Family Movement and as a catechism principal. He was a member of the De LaSalle Alumni Association and a lifetime member of the National Federation of Musicians. He performed regularly with the Red Arrow Veterans Marching Band and was a founding member of the Esquires Jazz Band of Detroit. Visitation will take place Monday August 16th, from 9:30am until the 10:00am Funeral Mass at St. Joan of Arc Catholic Church, 21620 Greater Mack Ave., St. Clair Shores, MI. The liturgy will be livestreamed and can be found at the livestream page from the parish website at "livestream.stjoan.church" Salvatore’s final resting place will be at Mt. Olivet Cemetery of Detroit, MI. in proximity to the predeceased members of his immediate family. Share memories with the family at their "On-Line Guest Book" @ WujekCalcaterra.com.

Salvatore J. Ciaravino, age 92 of Grosse Pointe Woods, Michigan, peacefully passed away in his home on August 11, 2021, surrounded by his loving wife and children. He was born in Detroit, Michigan on September 30, 1928 to John Ciaravino and... View Obituary & Service Information

The family of Salvatore Joseph Ciaravino created this Life Tributes page to make it easy to share your memories.

Send flowers to the Ciaravino family.