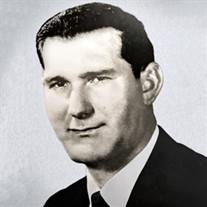 Robert James Zobl, DDS, of Macomb, Michigan passed away on July 3, 2021, after a brief illness. Bob was born in Detroit in 1929 to Eldred and Florence (Dougherty) Zobl. While Bob and his brother and cousin resided in Detroit, the three young men spent many memorable summers at the family farm in Lum, Michigan and visiting family in Marine City. Bob graduated from St. Anthony’s High School in Detroit in 1947 and completed his education at the University of Detroit, graduating from the University’s School of Dentistry in 1954. After graduation, Bob served in the United States Army for two years, stationed in Germany to provide dental services to army personnel. Bob opened his dental practice in Warren in 1956 and continued to practice until his retirement in 2014; for a time, he held the record as the longest-practicing dentist in Michigan. Bob was a highly-regarded member of the dental profession, advocating for children’s dental health practices and serving on Michigan’s Dental Ethics Committee for six years. He was named a fellow of the International College of Dentistry, and he was nominated by his peers for election to the prestigious American College of Dentistry. A faithful man who was a committed member of the parishes he attended throughout his life, Bob served on parish council, as an usher, or whatever was needed at the time. He served at St. John Vianney in Shelby Township until 2019. Whether playing cards, complaining about Detroit sports teams, or enjoying a round of golf, all of Bob’s passions centered around his greatest love - his family. Bob loved to host pizza and euchre nights and some of the family's fondest memories are of getting together with all the kids and grandkids to play game after game. Bob was a passionate golfer throughout his life. He began playing as a caddy at The City of Detroit Golf Club and played his last round this past Father’s Day with his sons But the Tigers, euchre, and even golf couldn't compete with Bob’s love for his wife, Patricia. They were married just a few weeks shy of 60 years and shared their lifelong love with five children, eleven grandchildren, and two great-grandchildren. Their love for each other was obvious to everyone around them and was a beautiful example for their children and grandchildren. Bob is survived by his beloved wife, Patricia (nee Kotkowski). His memory will always be a blessing to his children Susan (John Hakken), James (Nancy Jeanne), Richard (Margaret), Betsy Zobl-Tar (Jason), and Nancy Templeton (James). Bob’s dear grandchildren will always cherish memories of their beloved Slim - Patrick O’Brien (Jessica LoDuca), Chelsea Zobl, Courtney Ford (Ben), Jacob Zobl (Lindsay Rupp), Michael Zobl, David Zobl, Alec Jagosz, Sarah Zobl, Colin Templeton, and Marcus Templeton. Bob’s great-grandchildren, Asher and Elsie Ford, will learn to love Slim through the many stories they'll hear about the love he had for them and all his family. Bob is also survived by his beloved sister Beverly Dodge and his dear cousin Raymond Bodenweiser (Nettie). Bob was preceded in death by his dear parents Eldred and Florence, his dear brother Eldred, and his beloved grandson Erik. Visitation Wednesday from 3-8pm at Wujek - Calcaterra & Sons Inc., 36900 Schoenherr Rd at Metro Parkway (16 Mile). Instate Thursday 9:30am until time of 10am Mass at St. John Vianney Catholic Church, 54045 Schoenherr Rd, Shelby Township, MI 48315 (Btw. 24 & 25 Mile). The family asks that in lieu of flowers, gifts in Bob’s memory be made to organizations of the donor’s choice. Inurnment, Great Lakes National Cemetery. Please share memories with the family at their "On-Line Guestbook" at WujekCalcaterra.com

Robert James Zobl, DDS, of Macomb, Michigan passed away on July 3, 2021, after a brief illness. Bob was born in Detroit in 1929 to Eldred and Florence (Dougherty) Zobl. While Bob and his brother and cousin resided in Detroit, the three young... View Obituary & Service Information

The family of Robert James Zobl D.D.S. created this Life Tributes page to make it easy to share your memories.

Send flowers to the Zobl family.