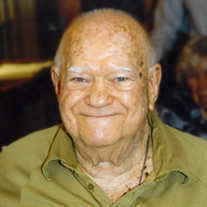 Robert E. "Bob" Cole of Sterling Heights, formerly of Bradenton, FL, and Shelby Township and Eastpointe (formerly East Detroit), MI, went to be with his Lord and Savior on May 10, 2021 at the age of 92. He was born at home in Detroit on February 7, 1929. Beloved husband of the late Mary Louise (nee Burgess). Loving father of Roy (Kathy) Cole, Margaret "Peggy" Couturier, and Roberta (Terry) Blanchard. Proud grandfather of Dr. Justin (Dr. Kaylynn) Saigh, Christine (Derek) Dobrydney, Dr. Jonathan (Dr. Amy) Saigh, Jennifer (David) Marley, and Jessica (Daniel) Waite. Step-grandchildren Robert Garber, Keith Garber, Jane (Lee) Locklear. Great-grandfather of Eva and Emily Waite, and Coco and baby girl Saigh born May 10, 2021. Step-great-grandfather of Leah and Emma Garber, and Joshua and Jacob Locklear. Step-great-great-grandfather of Raiden Locklear. Proceeded in death by his parents George and Helen (Rutherbusch) Cole, brothers Ralph (late June), Herbert (Barbara) and Roy Cole, sisters Eleanor (late John) McDowell and Ruby (late Karl) Nelson, and stepson Charles (Barbara) Garber. Robert was a proud veteran of the 82nd Airborne unit having served from 1947 to 49. After being discharged from the Army, he spent 30 years with Chrysler as a tool and die journeyman retiring in 1981. He loved to travel and his children have many fond memories of camping throughout the U.S. and Canada. Robert coached the East Detroit Tiger Cats little league football team and was a proud member of the U.A.W., the D.A.V. and the University Of Michigan President’s Club. He loved Michigan football and was a season ticketholder for over 30 years. Following his retirement he continued to travel throughout the world for several years and made a point of attending at least one away Michigan game each year. Winters were spent in Florida where he was active in the Lions Club 135, Bradenton. He also enjoyed spending time with family and looked forward to annual gatherings around the holidays. Robert was a member of Immanuel United Methodist Church in Eastpointe for many years. In his later years he attended services at Faith Lutheran Church in Troy as his health permitted. Visitation Thursday May 13th from 5-8 pm at Wujek - Calcaterra & Sons, Inc. 36900 Schoenherr at Metro Pkwy. (16 Mile). Instate Friday May 14th 10:30 am at Faith Lutheran Church 37365 Dequindre in Troy until Celebration of Life service at 11:00 am with Luncheon to follow. Interment Woodlawn Cemetery. In lieu of flowers, memorials to the D.A.V. Share memories with the family at their "On-Line Guestbook" at WujekCalcaterra.com

Robert E. "Bob" Cole of Sterling Heights, formerly of Bradenton, FL, and Shelby Township and Eastpointe (formerly East Detroit), MI, went to be with his Lord and Savior on May 10, 2021 at the age of 92. He was born at home in Detroit on February... View Obituary & Service Information

In lieu of flowers, memorials to the D.A.V.

Send flowers to the Cole family.