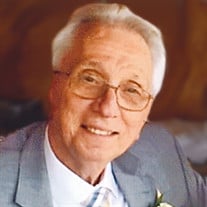 Richard Wioskowski, 77, passed away peacefully in his home on January 5, 2022. He is survived by his dear wife of 56 years, Rose Anne (nee) Gusumano Wioskowski, his four children, Wendy Darga, Richard (Andy Bilyeu) Wioskowski, Jason Wioskowski and Jeffery (Michele) Wioskowski, his sister Barbara (Walt) Sokoloski and one uncle Chester Turkiela. Richard was “Papa” to Alexis Anne, Mitchell Thomas, Jacob Joseph and Isabella Rose. He was preceded in death by his parents, Stella (Turkiela) and Richard Melvin Wioskowski. Richard enjoyed a long career in the Automotive Industry, which included serving as a Project Manager with Lamb Technicon and consultant work with Chrysler. After retiring, he enjoyed vacationing and spending time with his family. Visitation Monday, January 10 from 3:00-8:00pm with a Scripture Service at 7:00pm at Wujek-Calcaterra, 36900 Schoenherr, Sterling Heights. In state, Tuesday, January 11, 9:30am, Mass 10:00am at St. Paul of Tarsus 41300 Romeo Plank, Clinton Township. Due to the Covid surge, there will not be a luncheon following the mass on Tuesday, January 11. Donations may be made in his memory to the Felician Sisters of North America.

The family of Richard Wioskowski created this Life Tributes page to make it easy to share your memories.

Richard Wioskowski, 77, passed away peacefully in his home on...

Send flowers to the Wioskowski family.