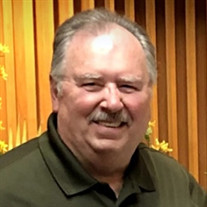 CICHOSKI, Richard. March 25, 2021. Age 74. Beloved husband of Patricia for 52 years. Dearest father of Lisa (Kevin) Richter and Kristie (Michael) Szejbach. Loving grandfather of Brianna, Addison, Noah, and Aubrey. Cherished brother of David (Marsha) and Dennis (the late Susan) and brother-in-law of Bill (Rosanne) Cherfoli. Beloved uncle of Matt, Billy, Lauren, Taylor and Connor. Rich worked in the automotive engineering field for over 50 years. He was passionate about cars and especially loved his 1969 Z28 Camaro. Even after he retired, you could find him tinkering in his garage re-engineering everything from small engines to household appliances. He loved to apply his engineering talents to help his daughters on their school projects. Rich’s motto was “go big or go home”. One project was so elaborate with hand-whittled canoes, a mountain range and teepees. While most kids in his daughter Kristie’s class made theirs in a shoebox, Rich had to take the day off work to deliver the massive-scaled project to the school. His daughters were once princesses for Halloween, he created their “wands” out of solid wood 1” thick where each point on the star came to a sharp point. They were actually the first princess warriors! It was a perfect example of how he was always there to protect his “princesses” and if he was not, he made sure they could protect themselves! Rich could never sit still for long; if he did, he would invariably have a snooze, which he had the God-given ability to do anywhere, anytime. He was often found doing the things he loved like woodworking, playing a variety of sports from baseball and hockey in his younger years to bowling, poker, darts and golf later in life. On the field, he was a force to be reckoned with…even after his newlywed wife accidently turned his football jersey pink. He passed down his knowledge and love of sports to his daughters by coaching their softball teams, playing basketball in the driveway with them and participating in family and neighborhood kickball games. He also was a Bocci Ball Champion! If you ever borrowed one of Rich’s many tools, there was no doubt who owned it. Rich was known to label everything he owned multiple times and in permanent marker. If you sent Rich to the store, be prepared for him to return with multiples of every item you requested. He simply could not buy just one, often saying the store was giving them away “for free”. Rich loved a good joke! He was always the life of the party with a hearty laugh, big bear hugs and a firm handshake. If you asked Rich how he was feeling, his favorite reply was “with my hands”. He often teased, “even a stopped clock is correct twice a day.” On his daughter Lisa’s 16th birthday, he told her he had a surprise for her in the driveway and tossed her a set of keys to her favorite car…a Corvette! Running outside with excitement, she discovered her new car….a remote controlled Barbie Corvette! Oh, how Rich loved to joke! If you grew up in Sterling Heights you know there were no streetlights…there was The Rich Cichoski Whistle. When the neighborhood heard it, everyone knew it was time to go home! Above all, he was a man who loved to tell stories. If a story was good enough to be told once (and they all were), it was good enough to be told 50 times. And horseradish. He loved horseradish. Rich’s grandchildren simply adored their “Poppi”. Some of their fondest memories were spent with him, holding hands, walking and laughing at Disney World…much as he did with his daughters when they were children. He loved to play long games of “Hide and Go Seek” with them. In fact, sometimes so long that they would fall asleep waiting for him to find them. While on vacation, Poppi watched his grandchildren enjoy their time in a resort pool. Upon their return, he decided to turn his backyard into an outdoor oasis complete with an in-ground pool and pond especially for them. In the winter months, the grandchildren loved to play cards and games with their Poppi. They found it even more entertaining to try to catch him cheating! Rich passed down his passion for cars to his grandchildren. He loved sharing his collection of model and remote controlled cars with them. They especially loved spending time together racing the cars with their Poppi. If you were a friend of Rich, his wife, daughters or grandchildren, he would not think of you as a friend; you became a member of the family and he would treat you like one. Poppi was a force of unwavering love, simply direct, larger than life (especially when he answered the door) with the biggest bear hugs! Our lives will forever be empty without him. He will always be remembered for the full life he led and the lives that he touched. We love and miss you so much more than we could ever say. Christians never say goodbye…we just say see you later! A 10am Memorial Mass will be held on Saturday, August 21st at St. Clement of Rome 343 S Main St, Romeo, MI. with a luncheon to follow. Please share memories with the family at their "On-Line Guestbook" @ WujekCalcaterra.com

The family of Richard Cichoski created this Life Tributes page to make it easy to share your memories.

Send flowers to the Cichoski family.