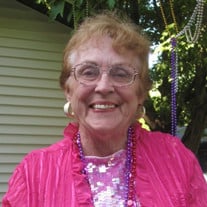 Nancy Louise Duffy January 26, 1933 – March 13, 2022 (Age 89) Nancy Louise Duffy (née Newman) passed peacefully on March 13, 2022, with her family by her side. During her time in hospice, her family shared favorite songs, poems, and memories with her, and there was much laughter all around. Beloved wife of the late Donald T. Duffy, proud mother of seven, grandmother of six, and great-grandmother of five, she was an inspiration to us all. Nancy’s beloved husband of 50 years, Don, and her two oldest daughters, Eileen Duffy, and Donna Duffy (Tim Hecei) preceded her in death. She is the beloved mother of her five surviving children, Karen Brocker (Kyle), Maureen Duffy, John Duffy (Trish), Trish Kramer (Jim), and Doreen Duffy. And proud grandmother to Regina Hollibush (Shawn), Brenda Sullins (Sean), Caitlin Duffy (Brandon Gadde), Michelle Duffy, Nathan Kramer, and Adam Duffy. Michelle’s boyfriend, Dan Kosowicz, is also dear to her heart. With love and great pride, she is the great-grandmother to Jackson, Sienna, and Quinn Hollibush, and Sophia and Landon Sullins. Nancy is survived by her dear sister and brother, Nora van Doren and Raymond Newman. She is preceded in death by her parents, John and Jeannette Newman, her brothers Jim and John Newman, and sister Sarah (Sally) Collins. She is also survived by her dear sisters and brother-in-law, Mary Most, and Carol and Pat Duffy. She is preceded in death by her beloved mother and father-in-law, John and Margaret Duffy, and brother-in-law John Duffy. Nancy’s Story: Nancy was born in Chicago in 1933 during the Great Depression. She grew up in an inner-city tenement apartment, surrounded by a loving, extended family from Ireland, and neighbors who had immigrated to the area from all over the world. Throughout her life she availed herself of the cultural life around her, including listening to, studying, and performing classical music, attending opera, performing in plays, and visiting fine art museums all around the United States. Her love of beauty and curiosity about the world around her has been a continuing inspiration to her family. A gifted vocalist, she had the opportunity to study voice and perform in Chicago, including in a choir conducted by Leonard Bernstein. After graduating from Sacred Heart High School in Chicago, she moved to New York City to continue to study voice and to perform. However, shortly after moving to New York City, love brought her back to Chicago. Nancy and Don married in 1953, started a family, bought their first home in Markham, Illinois, and their family quickly grew to five children – four girls and a boy. Shortly after moving to Downers Grove, Illinois, they were blessed with two more girls. Professional opportunity for Don brought them to Michigan, and a move to a beautiful older home in Grosse Pointe, much in need of Nancy’s interests and skills. Ahead of her time in many ways, Nancy was an accomplished restorer, including bringing fine woodwork back to life, and re-wiring the electrical. A skilled hostess and cook, Nancy always enjoyed entertaining friends and family. When the youngest child was in high school, Nancy started working as a paralegal for an immigration law firm in Detroit. She took great pride in being able to assist the firm’s clients from around the world, and this interest continued after she retired. As a volunteer, she tutored recent immigrants in English as a Second Language, and assisted them in fully engaging in society, including helping them obtain their driver’s licenses, and pass their citizenship tests. Nancy’s contributions to her community as a volunteer also included designing and sewing costumes for local theater groups and helping in many ways with local public libraries. In addition to her volunteer work, at age 61, Nancy’s continued passion for literature, music, and the arts led her to obtain a bachelor’s degree in literature from Grand Valley State University. Nancy bestowed great gifts upon her family, including her perceptive love of nature, appreciation of the beauty of the world all around her, and her insatiable curiosity. She will be truly missed. In lieu of flowers, the family requests donations be made to the Detroit Institute of Arts and the American Cancer Society. A memorial visitation will be held for Nancy on Sunday, April 10, 2022 from 10am-12pm with a Rosary to follow at Wujek-Calcaterra & Sons, Inc. Please share memories with the family at their "On-Line" Guestbook @ WujekCalcaterra.com

The family of Nancy L. Duffy created this Life Tributes page to make it easy to share your memories.

Send flowers to the Duffy family.