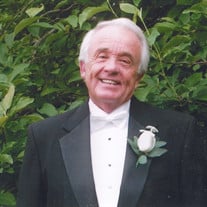 Loving Husband, father, grandfather and great grandfather…. Maurice Joseph Chabot (Maury) passed away on 3/20/22 at his home peacefully. He was born on 3/31/1933 in Pontiac, Michigan. His parents were Islay May Chabot (Robertson) and Joseph Ernest Chabot. He was the oldest of 3, sister Margaret Jean and brother Albert Eugene, all preceded him in death. Maury’s parents owned a Hardware Store in Detroit, where he was raised in a flat above the store (Chabot Hardware). He learned from his parents the meaning and value of hard work, patience and caring about people by the actions you live. Maury attended St. Joseph High School (Detroit, an all-boys catholic school). He then left for the Big Apple (NYC) to attend college, studying Business Administration. Maury felt lucky to have had the chance to work selling “hot dogs” in Yankee Stadium… “Hot Dogs, Hot Dogs, Get your Hot Dogs!!”. Maury served in the U.S. Army from 1954-1956. He was married to his first love of his life, Marilyn Ann Dean for 37 years. She preceded him in death in 1995. Marilyn and Maury had 2 children David Chabot (Donna) and Carey Winkel (Paul). Marilyn and Maury were able to share the joy of having four grandchildren, Brett (Kathryn), Kyle, Eric (Brianna) and Sean (Kayla) together as a couple for a short time before her untimely passing. He has since been blessed with 2 great grandchildren, Joshua and Noah. He was blessed again by meeting his next love of his life, Carol Taylor-Chabot, married in 2005. Married for almost 17 years, they shared a love that was magic. His new family then blossomed with Carol’s two sons, Tim (Tammy), John (Donna) and their children, Megan Morrow (Drew), Brooke and Michael. Maury worked in retail for many years, then spent 25+ years in sales for Wallside Window. He then found an opportunity to work with his daughter in her business in 2008 for many years. His genuine kindness and generosity were felt by everyone he knew, even those he met for the first time. He was known for his smile, his warm and genuine heart. He was patient, he was caring, he was kind. He never ever complained. He loved his wife Carol so much, she was his buddy, his honey. Maury demonstrated that the Kingdom of God is truly a way of life and that the Kingdom of Heaven is a daily posture. Maury’s life will be celebrated and honored on Sunday, March 27, 2022 at Wujek-Calcaterra & Sons funeral home in Shelby Township, Mi. Visitation will be from 1-6 pm, with his formal celebration and send off starting at 6 pm. Maury will be laid to rest next to his first wife at Christian Memorial Cemetery in Rochester, MI. This will be a private service. The family will especially miss his laugh, how he always so clearly expressed his love, and even how in his last days, he still had it in him to be a great host. In lieu of flowers, the family has chosen the Wounded Warrior Project (support.woundedwarrior project.org)

Loving Husband, father, grandfather and great grandfather&#8230;. Maurice Joseph Chabot (Maury) passed away on 3/20/22 at his home peacefully. He was born on 3/31/1933 in Pontiac, Michigan. His parents were Islay May Chabot (Robertson) and... View Obituary & Service Information

The family of Maurice Joseph "Maury" Chabot created this Life Tributes page to make it easy to share your memories.

Send flowers to the Chabot family.