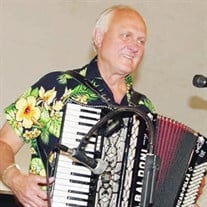 Marshall John Lackowski, of Washington, Michigan, better known as "Big Daddy" Lackowski, passed away at age 85 on April 9th, 2022, in Bonita Springs, Florida. He was the beloved husband of Mary Ann Lackowski for 50 years, the dear father and father-in-law of seven children and their spouses: Jodi (Hank), John (Cherie), Chris (Amy), Bill (Katie), Josh (Michelle), Marianne (Luke), and Mark (Laura); and proud grandfather of 21 grandchildren: Cole, Joseph, Jacob, Owen, Kadin, Daniel, Ella, Noah, Samara, Adele, Megan, Asher, Scarlett, Sawyer, Levi, Jane, Alaina, Ben, Lyle, Leo, and Amaya. Cherished uncle of many nieces and nephews.He was predeceased by his sister Jeanette (Al) and brothers Clarence (Betty), Bill (Lorraine), and Alex. Marshall was born in Parisville, Michigan on March 8, 1937, to Alexander and Regina Lackowski. In the 1950s, Marshall and his brothers, Bill and Clarence, formed a three-piece polka band, "The Lackowski Brothers Orchestra," which performed at numerous festivals and weddings throughout Michigan. By the early 1960s, the group retired, and Marshall answered the call to join the priesthood, and entered St. Mary’s Seminary in Orchard Lake, Michigan. It was during this time that he acquired his famous name "Big Daddy Lackowski" as he was an older mentor to his fellow seminarians. Music continued to be an important part of his life during these years and brought Big Daddy many wonderful opportunities as he used his accordion to evangelize and share his talents. Big Daddy was able to sing Polish koledy on ABC radio and radio free Europe from 1963–1967, and, in 1969, NBC ran a television special, "The Challenges of the Church," in which he appeared singing and playing the accordion while at the seminary. Marshall soon met Mary Ann Finelli, of Kearney, New Jersey, through her brother Joseph, and they began a relationship that eventually led to their marriage on August 22, 1971. Marshall and Mary Ann quickly combined their love of music and strong faith in God to raise a family and start a successful career in entertainment and tourism with their band "Big Daddy Lackowski & the LaDeeDas" and travel company "Big Daddy Tours." Big Daddy and his band performed at numerous anniversaries, dances, festivals, and weddings, and were featured on national radio and television broadcasts, including the Emmy Award winning documentary "Our Polish Story." He was inducted into the Michigan State Polka Hall of Fame in 1997. The band continued to be a family affair, featuring Mary Ann and Jodi on drums, and returning full circle to the original orchestra with three Lackowski brothers, John, Josh, and Mark, performing together on stage. Big Daddy also used his talents to continue serving the church by uniquely celebrating a "Polka Mass" that featured hymns, prayers, and worship music in English and Polish, and by collecting tens of thousands of dollars for World Vision through Big Daddy Tours to fight childhood poverty. Thus, after a dozen albums, thousands of performances, and hundreds of trips, Marshall and Mary Ann brought joy to countless people through their generosity, kindness, and love, sharing their passion for music and travel as a personal ministry to serve God and others. Big Daddy will always be remembered for bringing a smile to your face, singing his famous "LaDeeDa" and teaching everyone how to walk faithfully with Jesus through his moving rendition of "One Day at a Time." Visitation Monday, April 18th, 2022, from 1-9pm with a 7pm American Polish Century Club Service at Wujek - Calcaterra & Sons Inc., (Shelby Twp.) 54880 Van Dyke at 25 Mile Rd. Instate Tuesday, April 19th, 2022, from 9am until time of 10am Mass at St. Lawrence Catholic Church, 44433 Utica Rd. (S. of M-59). Interment, St. Lawrence Cemetery. In lieu of flowers memorial contributions are appreciated to World Vision (https://www.worldvision.org/). Please share memories with the family on their online guestbook at WujekCalcaterra.com

Marshall John Lackowski, of Washington, Michigan, better known as "Big Daddy" Lackowski, passed away at age 85 on April 9th, 2022, in Bonita Springs, Florida. He was the beloved husband of Mary Ann Lackowski for 50 years, the dear father and... View Obituary & Service Information

The family of Marshall John "Big Daddy" Lackowski created this Life Tributes page to make it easy to share your memories.

Send flowers to the Lackowski family.