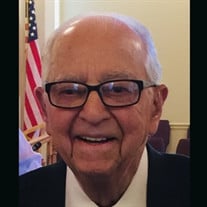 Louis Pietrangelo was born to Antonio and Rosina Pietrangelo on February 18, 1922 in Detroit, Michigan. He was blessed to live 99 years before passing on to his reward on September 16, 2021. Louis was predeceased by his wife, Jennie (DiBattista), seven siblings: Nicholas, Lena, Joseph, Florence Owens, Jacob, Mary Kibat, and John. He is survived by his daughters: Marilyn (Peter) Scolaro and Carolyn (John) Griffith; four grandchildren: Scott (Mandy) Griffith, Bryan (Heylen) Griffith, Christopher (Alissa) Scolaro, and Julie (Brett) Gibson; and ten great-grandchildren: Ethan Griffith, Gracie Gibson, Wesley Griffith, Connor Griffith, Calvin Gibson, Aaron Scolaro, Zacary Griffith, Mitchell Scolaro, Allen Griffith, and Reid Scolaro; plus a host of nieces and nephews, brothers and sisters of The Church of Jesus Christ, and friends. Louis attended Cass Tech and Wilbur Wright High Schools in Detroit, Michigan focused on learning auto mechanics. He enrolled at Lawrence Tech to study engineering, but studies were interrupted by WW2. He enlisted in the Army Air Corps and was trained as a gunner and mechanic, first on B-17’s later B-29’s. Louis was stationed on Tinian Island in the Pacific from which the Air Corps sent 500 B-29’s daily to bomb Japan. Ultimately, he witnessed the sending of the atomic bomb to end the war. He was always proud of his military service and was an avid patriot and advocate for all veterans. During his time on Tinian, Louis was involved in a terrible accident as a fully loaded bomber fell apart upon take-off. As he was about to be hit by falling parts of the plane, Louis heard the voice of God directing his escape. His account of this event became his “trademark testimony” throughout his life. After the war, Louis returned to Detroit. He married Jennie on September 21, 1946, and they were blessed with twin daughters on May 11, 1948. Louis had a career in transportation maintenance for the City of Detroit (DSR / DDOT) and was Chief Steward at the time of his retirement. On October 26, 1958, during a spirit-filled meeting of The Church of Jesus Christ, Louis was called by the Spirit of God and was baptized in witness to his pledge to serve God for the rest of his life. He became very active in the Church. Louis was Branch Sunday School Superintendent during the prime years when baby boomers swelled the Sunday School. On March 27, 1966, he was ordained a Teacher of the Church in which office he also served the Branch as Presiding Teacher. On May 27, 1979, he was ordained into the ministry as an Elder of the Church. He served a term as Presiding Elder of the Branch. Louis was a friend and advisor to many. He was self-sufficient – taking care of his home, driving his own car, etc. – until his recent illness struck him in July of this year. His decline was rapid as God’s mercy was again extended to him. He was always admired and regarded as a positive influencer until his passing on September 16. He will be missed. Visitation Sat. Sept. 25th 9:00 am until Funeral Service at 12:00 pm at Wujek-Calcaterra & Sons Inc. (Shelby Twp.) 54880 Van Dyke @ 25 Mile Rd. Interment White Chapel Cemetery. Share memories with the family at their "On-Line Guestbook" @ WujekCalcaterra.com

Louis Pietrangelo was born to Antonio and Rosina Pietrangelo on February 18, 1922 in Detroit, Michigan. He was blessed to live 99 years before passing on to his reward on September 16, 2021. Louis was predeceased by his wife, Jennie (DiBattista),... View Obituary & Service Information

The family of Louis Peter Pietrangelo created this Life Tributes page to make it easy to share your memories.

Send flowers to the Pietrangelo family.