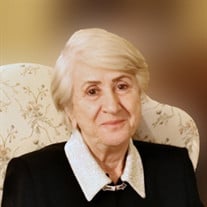 Leposava Shadko, beloved wife of the late Harold Shadko, and dearest sister of the late Marija Minanova and Adrijana Randolph died peacefully in the early morning hours of May 5, 2022 at Sunrise on Vernier in Grosse Pointe Woods. She will be deeply missed by her nephews Kristijan and Oktavijan Minanov, their wives Deborah and Alexia, and her great-nephews and great-niece Karstan, Nikolas, Alexander, Markus and Karina, as well as by Harold’s daughter Suzanne Peele and husband Jon, his sons Greg and Jim Shadko and his wife Mary Lyon, granddaughters Lisa, Leigh and Quinn and several great grandchildren. Lepa was born on May 22, 1937 in Prilep, Socialist Federal Republic of Yugoslavia in her family home. She was the eldest of the three daughters of George Panoski and Pavlinka Panoska (nee Kalpakoska). In 1965, she followed her younger sister’s lead and immigrated to the United States. She was facile with languages, speaking multiple fluently and obtained a master’s degree in Russian Literature at Wayne State University. She met Harold while acting as a Russian translator and they were married in 1975. Lepa subsequently assisted Harold in running Production Industries, the auto parts manufacturing business he founded. The couple enjoyed summers at Crystal Lake and winters in Scottsdale, Arizona. Lepa was also an active member of Nativity of the Virgin Mary Macedonian Orthodox Church in Sterling Heights. Towards the end of her life, Lepa suffered from Alzheimer’s and lived at Sunrise on Vernier, where the staff truly doted on her. Lepa had an infectious joie de vivre. She was a vivacious woman, who could always be counted on for a warm smile, a good laugh, an entertaining story and impeccable fashion. She was an advocate of wellness long before it was in vogue and was an excellent cook, well known for her Macedonian dirt. Her loves were entertaining and traveling. She will be much missed by her family as well as by her friends who loved her like family. Private Eastern Orthodox services were held at Wujek Calcaterra Funeral Home and at White Chapel Memorial Cemetery in Troy.

Leposava Shadko, beloved wife of the late Harold Shadko, and dearest sister of the late Marija Minanova and Adrijana Randolph died peacefully in the early morning hours of May 5, 2022 at Sunrise on Vernier in Grosse Pointe Woods. She will be... View Obituary & Service Information

The family of Leposava Vojnichanoska Shadko created this Life Tributes page to make it easy to share your memories.

Send flowers to the Shadko family.