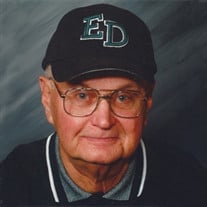 Lawrence (Larry) F. Memmer a man who gave so much and asked for nothing in return passed away on July 28th, 2021. He will be missed and lovingly remembered by his daughter Michelle (Michael) Pannuto, granddaughter, Nicole, grandson, Nicholas, niece Donna (Jim) Stieber as well as countless others that were fortunate to have known him; affectionately known as Uncle Larry, Moonie and Coach. Larry was born in East Detroit (now known as Eastpointe-much to his displeasure) on November 5, 1937. He was predeceased by father Charles, his mother Louise, and sister Mary Louise. At the age of 8 when his father passed away a father of his boyhood friend took him under his wing and introduced him to a bat, a ball and a mitt. Baseball! He never looked back. At the age of 17 he was recruited by the Detroit Tigers as a pitcher and offered a contract to play professional baseball. Unfortunately, he could not pursue this opportunity, his passion and went to work for the US Post Office retiring after 35 years. His kindness, warm personality and contagious laugh added a countless list of friends and acquaintances he would gather over the years. Larry became a reservist for the US Army, married and was blessed with the birth of his daughter Michelle. In 1978 he began coaching girl’s softball with the Belleview Dad’s Club and met his lifelong friend Jack Dailey. His teams won 5 consecutive titles, as well as his St. Barnabas club capturing four C.Y.O Championships. He led the Sterling One Youth program to 3 titles and 1 with Macomb County Fastpitch. He went on to become the EDHS girl’s junior varsity softball coach where he unselfishly gave his time to countless girls for 23 years and won over 450 games, only to leave the position when his granddaughter Nicole began playing high school softball. Larry’s USSSA summer travel teams played in 7 World Tournaments, finishing among the top ten in three of them. He was beyond honored to be inducted into the Macomb County Coaches Hall of Fame in 2007. His passion was baseball, the Tigers of course, but also the Lions, Red Wings, Tom Brady and the Patriots, U of M as well as old black & white movies, the casino, scratch off lottery tickets and playing rummy. Let’s not forget a shell of beer or a Jack & diet with cherries. In lieu of flowers, please make donations to the Capuchin’s Soup Kitchen, 1820 Mt. Elliott Avenue, Detroit, MI 48207-3496. Visitation Wednesday 3-9pm with a 7pm funeral service at Wujek-Calcaterra & Sons, Inc. 36900 Schoenherr Rd. at Metro Pkwy(16 Mile Rd.)

Lawrence (Larry) F. Memmer a man who gave so much and asked for nothing in return passed away on July 28th, 2021. He will be missed and lovingly remembered by his daughter Michelle (Michael) Pannuto, granddaughter, Nicole, grandson, Nicholas,... View Obituary & Service Information

The family of Lawrence Frederick Memmer created this Life Tributes page to make it easy to share your memories.

Lawrence (Larry) F. Memmer a man who gave so much and asked for...

Send flowers to the Memmer family.