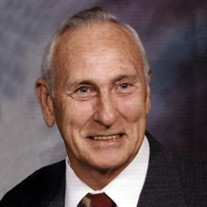 THOMPSON, KENNETH G. Age 91 March 11, 2022 Kenneth was born in Elkton, Michigan to John and Minnie (Eisinger) Thompson. He grew up as a farmer. He graduated from Elkton High School in 1948 and went to Ft. Wayne Bible College in Indiana. He joined the Army in October of 1952 serving through 1954 during the Korean War. He served in Branch #202 as Military Police Corporal. He was an Honor Guard for the Government Officials in Austria. He was married to Bernadine June Weidman on February 25,1956 in Bad Axe, Michigan for 65 wonderful years. They have two children: Beth Ann Swientoniowski Guilstorf (Thomas) and Thomas Kenneth Thompson (Cynthia Ann Haywood). They have 3 granddaughters: Jayme Lee Swientoniowski, Stacy Lynn Weeks (Anthony) and Casey Anne Dersa (Robert). They have six great-grandchildren: Brendan, Cameron, Patrick, Emma, Alexis (Weeks), and Dale (Dersa). He enjoyed life, family, sports, hunting, ice fishing and his church. During his college years he took Bible courses to understand and interpret the Word of God. After college he went into the service as a Military Police. His profession was a rough carpenter, as well as preaching to fill in until the church found a pastor. He also served as a youth group pastor, taught adult Sunday School, and served as a deacon for many years. He was a very devout christian and his motto was “As for me and my house we will serve the Lord”.  He coached his son’s baseball team, and went to his football games. He played softball for the church team as a pitcher, (no one was going to out do him)!  He attended sports functions, piano recitals and high school musicals.  He was a very devoted father, grandfather and great grandfather. Preceding him in death was his lovely wife Bernadine (2021), his parents John (1947) and Minnie (1964), sisters Eleanor Eicher (1976) and Irene Roberts (1988), brothers Thomas (aka TJ) (1922), Leonard (2009), Donald (1963), and Jack (1974). Ken is survived by his brother, Lyle (Naomi); sister-in-Law, Eleanor; two children, three granddaughters and six great grandchildren. He lived in Shelby Township, MI (aka Utica) from 1956-2022 in the home he built for his family. He passed in Chandler, Arizona while visiting with family. Visitation Sunday 4-7pm at Wujek-Calcaterra & Sons 54880 Van Dyke at 25 Mile Rd. (Shelby Township). Funeral Monday Instate 10:00am at Shelby Bible Church 47905 Hayes (btw. 21 & 22 Mile Rds.) until time of Service at 11:00am. Interment Christian Memorial Cultural Center. Share memories with the family at their "On Line Guest Book" @ WujekCalcaterra.com

THOMPSON, KENNETH G. Age 91 March 11, 2022 Kenneth was born in Elkton, Michigan to John and Minnie (Eisinger) Thompson. He grew up as a farmer. He graduated from Elkton High School in 1948 and went to Ft. Wayne Bible College in Indiana. He... View Obituary & Service Information

The family of Kenneth Gordon Thompson created this Life Tributes page to make it easy to share your memories.

Send flowers to the Thompson family.