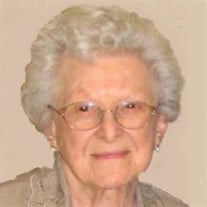 Josephine Mary Swiatek of Sterling Heights passed away peacefully surrounded by family at the Brookdale assisted living facility in Utica on March 26, 2022 at the age of 97. Born on April 10, 1924 to John and Lucy (Drag) Roczniak in Hamtramck, Michigan, Josephine was the daughter of Polish immigrants. She grew up during the Great Depression and second World War. On April 7, 1945, Josephine married Walter Swiatek. In 1962, they moved to what is now known as the city of Sterling Heights where they became one of the first members of St. Ephrem Catholic Church. Walter predeceased her on May 22, 1981. Josephine was proud of her heritage and well-known by friends and family for her authentic Polish cooking and discriminating taste. Foods such as her homemade pierogi, kielbasa, golambki and pastries could rival the best of chefs. Many of the Polish recipes and customs, particularly those associated with the seasons of Easter and Christmas, have been lovingly passed down and carried out by her children and grandchildren. Josephine will be fondly remembered by her daughters Marcia (Louis) DiMambro of Shelby Township and Lynette (Brian) Frankovich of Midland; her son John (Kristine) Swiatek of Utica; her grandchildren Tracy (Jeffrey) Rimarcik, Jesse Frankovich, Jacob (Erin) Frankovich and Christian Swiatek; her great-grandchildren Luke, Logan, Margaret and Joiner; her sister Genevieve Peters of Beverly Hills; and several nieces and nephews. In addition to her husband Walter, Josephine was predeceased by their infant son Joseph, and her siblings Joseph Roczniak, Andrew Roczniak, Sister Marian, C.S.S.F., Mitchell Roczniak, and Thomas Roczniak. A Memorial Visitation will take place on Saturday, April 30, 2022, at 9:30 a.m. at St. Kieran Catholic Church, 53600 Mound Road, in Shelby Township until time of the 10:00 a.m. Memorial Funeral Mass. Memorial donations in Josephine’s name may be made to the Greater Detroit Agency for the Blind and Visually Impaired or the Capuchin Soup Kitchen in Detroit. The family would like to thank the staff at Brookdale and Assured Hospice for their care and compassion. Please share condolences for Josephine with the family at their "On-Line Guest Book" @ WujekCalcaterra.com

Josephine Mary Swiatek of Sterling Heights passed away peacefully surrounded by family at the Brookdale assisted living facility in Utica on March 26, 2022 at the age of 97. Born on April 10, 1924 to John and Lucy (Drag) Roczniak in Hamtramck,... View Obituary & Service Information

The family of Josephine Mary Swiatek created this Life Tributes page to make it easy to share your memories.

Send flowers to the Swiatek family.