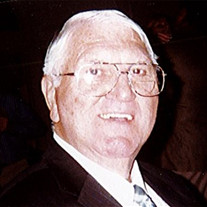 Not sure what to send?

RONDO, John Henry. January 7, 2022. Age 93. Beloved husband of the late Sally. Loving father of Marla Rondo, Janice Denning (Mark) and Nancy Hartley (Jerry). Proud and loving grandfather of Melissa (Michael), Katie (Mycael), Zachary (Julie), Ashley (Ross), Alex (Margaret) and Haley, and great-grandfather of William, Kyler and Jayden. Also survived by dearest companion Maureen Thomas. John Henry Rondo, a lifelong son of Mount Clemens, Michigan died peacefully at his home on January 7, 2022. He was 93 years old. John was born on June 26, 1928, to Mary Josephine and Herbert Edward Rondo. He was 9th out of 11 children. Growing upon he worked with his brothers in his father's business, Rondo and Sons Machine Works. He played football throughout high school. He was a lineman. He went on to play football in college for the University of Illinois and at Wayne State University. While playing for Wayne State University, against a semi-pro team, he intercepted a pass from Johnny Unitas, which his team ended up scoring. This was his claim to fame. For his remaining two years of college, he became the Defensive Captain at Wayne State University. He received a Bachelor of Science degree from Wayne State University and a combined Master's Degree from the University of Michigan in Elementary & Secondary Administration. In 1972, following 17 years of teaching at three junior high schools in Detroit, he moved on to the Assistant Principal's position at Chippewa Valley High School. Eight years later he became Principal. He retired after 14 years of service. He said, in retrospect it's been a rewarding career and he has nothing but praise for the Chippewa Valley School system. John also served in the United States Army (Korean War) and retired as a Lieutenant Colonel. His family will lovingly remember their father, grandfather, great grandfather and brother as one who was an avid hunter. He also loved fishing, golfing, bowling and travelling with his wife and daughters. He was a devoted family man and his legacy will continue by those surviving him.Visitation Friday, January 21 from 3-9pm. Funeral Saturday, January 22 at 10am at Wujek-Calcaterra & Sons, Inc., 36900 Schoenherr at Metro Parkway (16 Mile). Interment, Cadillac Memorial Gardens East, Clinton Township. Memorial contributions to the American Cancer Society or the American Heart Association are appreciated. Please share memories with the family at their online guestbook at WujekCalcaterra.com * the family kindly requests that all visitors please wear a mask and observe social distancing practices *

The family of John Henry Rondo created this Life Tributes page to make it easy to share your memories.

Send flowers to the Rondo family.