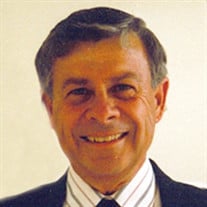 SCHMEISER, Jerome R. February 13, 2022. Age 87. Beloved husband of Patricia and the late Joyce Bluml. Loving father of Shawn (Terri) Schmeiser, Cara (Michael) Brink, Mia (Alan) Miller, and step father of Brett Bielski. Dearest grandfather of Jeanette, Megan, Mathew, Shannon, Cody, Hunter, Heather and step grandfather of Violet, and Penelope. Cherished brother of Jack (the late Elaine), and David (Mary). Jerome was born in Iowa to his parents Martin and Winona. He grew up working his summers on his uncle's farm where he fell in love with John Deere tractors. He enjoyed them so much, he started his own collection of memorabilia and years later he bought a replica of the one he used when he was a teenager and restored it. He often traveled with his tractors to many different shows where he often won best in show. He graduated from Iowa State with his Landscape Architecture degree, and years later from Wayne State with his Master's degree in City Planning. He was Warren's City planner for many years until retiring and becoming a planning consultant with his partner Jack for many years where they overlooked Macomb, Richmond, and Ray Townships. Jerry always had a great interest in traveling, taking pictures of people, genealogy, woodworking, golf, baking breads and cookies, fishing as well as maintaining his vegetable garden. Visitation Monday, February 28th, from 3-8pm with a 7pm Prayer Service at Wujek - Calcaterra & Sons. (Shelby) 54880 Van Dyke at 25 Mile. Instate Tuesday, March 1st, from 9:30am until time of 10am Mass at St. Isidore Catholic Church, 18201 23 Mile Rd, Macomb. In lieu of flowers donations are welcome to St. Isidore Catholic Church. Share memories with the family at their "On-Line guestbook" @ WujekCalcaterra.com

The family of Jerome "Jerry" Schmeiser created this Life Tributes page to make it easy to share your memories.

Send flowers to the Schmeiser family.