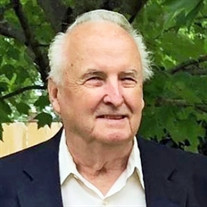 2 Corinthians 5:6-8 - Therefore we are always confident, knowing that, whilst we are at home in the body, we are absent from the Lord:(For we walk by faith, not by sight. We are confident, I say, and willing rather to be absent from the body, and to be present with the Lord. James E. Starling, age 84, born to the late Alfred and Dorothy (Desnmore) Starling in and of Detroit, Michigan. James “Jim” Starling is preceded in death by his siblings Richard “Dick” (Donna) Starling, Bill (Connie) Starling, Bob (Betty) Starling, Pat (Ray) White, Catherine (Fred) Otto and Irene (John) Everts and granddaughter Erika. To cherish his memory, he is survived by his beloved wife, Mable L. Starling, three sons, Jeffrey (Cathy) Starling, Gregory (Debbie) Starling and Ronald (Erika) Starling, his brother, George (Joyce) Starling, his sister in law Connie (Ray White), his grandchildren, Stephanie (Hunter) Starling, Johnathon (Brittany) Starling, Alishia Starling, Crystal (Andrew) White, Kiersten Starling, Melissa and Andrea Howden, and Ricki and Randi Hudson; his great grandchildren Zander, Nadiya, Teegan, Hayden, Aubree, Rylan, Cole and Violet and many nephews and nieces, whom he adored and was very near and dear to. Jim proudly served his country including his duty station of Korea on behalf of the United States Army from 1957 – 1959 when he was Honorably discharged, and before marrying in 1960. He raised his family in Sterling Heights and retired from the Detroit News in 1997. After retirement, he kept himself busy with employment at the Stoney Creek Country Club. Jim was a loyal Usher and Board member for his longtime church, North Pointe Baptist and most recently a Deacon for Hope Community Baptist Church. Most people would describe Jim as the “jokester”, always making everyone laugh and it is safe to say that he was admired by many. Jim enjoyed traveling to both new and familiar places within and outside of Michigan, with his family and more recently with his wife. He has made footsteps all over the country and continued checking destinations off his bucket list as he lived his life to the fullest. He admired antique cars and enjoyed attending the Woodward Dream Cruise each year, in Detroit. He enjoyed all sports, Golf especially. If you couldn’t find him on the golf course, he was more than likely watching Golf or another sport on the tv in the comfort of his home, while chewing on sunflower seeds or pistachios. Jim wore many hats as “Husband”, “Dad”, “Grandpa”, “Uncle” and Friend and he cherished each of those titles, but especially his role as Husband as he was proudly with his bride for 62 years. He was the Patriarch and a true staple to the Starling Family and will be missed deeply as he went home to be with his Lord and Savior. Instate Friday 10am until the time of the Funeral Service at 11am at Hope Community Baptist Church, 42259 Hayes Rd, Sterling Heights. Interment Christian Memorial Gardens West in Rochester Hills, MI. Please share memories with the family at their "On-Line Guestbook" at WujekCalcaterra.com

2 Corinthians 5:6-8 - Therefore we are always confident, knowing that, whilst we are at home in the body, we are absent from the Lord:(For we walk by faith, not by sight. We are confident, I say, and willing rather to be absent from the body,... View Obituary & Service Information

The family of James Edward Starling created this Life Tributes page to make it easy to share your memories.

Send flowers to the Starling family.