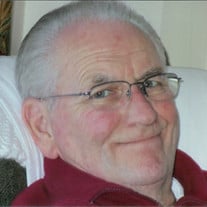 James "Jimmy G" Gillim. Passed on April 9th, 2022. The life and times of James Gillim, affectionally known by all as Little Jim (father James was big Jim), or to all in his professional circle as "Jimmy G". Everywhere he went he was well known... View Obituary & Service Information

The family of James "Jimmy G" Gillim created this Life Tributes page to make it easy to share your memories.