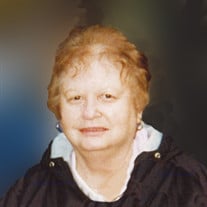 GOULD, Gloria Ann (nee: Sanato) was born April 20th, 1931 in Waukegan, Illinois to Emilo and Mary (Rebella) Sanato. She was a resident of Warren, Michigan from 1955 until her death. She is proceeded in death by her loving husband Wallace, their daughter Barbara Ann, her parents, her siblings; Joseph (Hazel), Richard, James, Elaine (Brouillard), in-laws Francis and Charlotte Gould, Milton and Marie Gould, Jerry Jans. She is survived by her children; James (Monica), Michael (Rose), Thomas (Cathy), and Elaine Fredal (Donard). Her 10 Grandchildren and 6 Great-grandchildren Her siblings Corrine Jans and Joanne (Thomas) Longfield, In-Laws Jerry Sanato and Gerald Brouillard and many nieces and nephews. Gloria enjoyed reading, playing the organ (in her younger days) and watching Andy Griffith (every day for hours) she even got her caregivers to enjoy watching Andy Griffith with her. She especially enjoyed spending as much time as she could with her family. Everyone that came into contact with her instantly realized what a special woman she was. Kind to everyone she meets. She would make people laugh at the things she would say and do. "I love your Mom" they would say, "she is so funny!" She loved to tell stories of the past of her childhood growing up in Illinois and making sure every knew how to say Illinois with the silent "s". "There's no "noise" in Illinois!" She would tell her stories over and over again to anyone that would listen and repeat them several times. Occasionally a new one would emerge that you never heard before. She met her husband, while he was stationed at the Great Lakes Navel Academy in Chicago, at a dance. Even though he was dressed in civilian clothes, while they danced, she asked him how long he had been in the Navy. He asked her how she knew he was in the Navy, and her response was "by your shoes!" They married November 29th, 1952 and moved to Michigan after he got out of the service. She was well loved by her children, and she equally loved them back. There was nothing she wouldn't do for them or them for her. We couldn't have asked for a better "Ma". Gloria was a fantastic Grandma to Jason, Matthew, Christeena, Thomas, Cara, Patty, Christopher and Samantha, Heather and Nicole. Great grandmother to Easton, Isabella, Sophia, Blake, Owen and Winnie. She will be sorely missed in our lives, but as we all know she is back with her loved ones, and we will one day meet again.

GOULD, Gloria Ann (nee: Sanato) was born April 20th, 1931 in Waukegan, Illinois to Emilo and Mary (Rebella) Sanato. She was a resident of Warren, Michigan from 1955 until her death. She is proceeded in death by her loving husband Wallace,... View Obituary & Service Information

The family of Gloria Ann Gould created this Life Tributes page to make it easy to share your memories.

Send flowers to the Gould family.