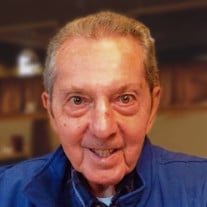 Gerald Joseph Mager Sr. was born on August 2, 1931 and was 89 years of age. He peacefully passed away with God's grace on March 23, 2021. He was a beloved husband to his wife Marion Mager, they were married for 67 years. He was a loving Father of Gerald Jr. and (Josie) Mager, Brenda Mager and (Sally King), Kathy McKay, Mary and (Kurt) Karrer, Carol and (Tom) Orton. Proud grandfather to Jennie and (Chris) Bryant, Heather McKay and (Jeff Sherry), Jessica Mager and (Ryan Kelly), Brannon McKay, Tom and (Ashley) Newman, and Mitchell Mckay and great grandchild, Giada Bryant. Served in the United States Armed Forces in the Airforce Division during the Korean War along with serving as a Detroit Police Reserve. He and his brother, Ron, ran their father’s grocery store AG Food Market/Magers Quality Meats & Groceries in Detroit until they sold it in 1974. From there, he worked at DiMaggio’s grocery store as a meat processor. He then went on to get his Journeyman’s card to become an Master Electrician. He worked for TACOM in Warren until he retired. Even after he retired, he continued to do side electrical side jobs. He was full of life and could light up a room with his charisma, magnetic personality, and strength of character. Jerry was a resident of Warren, MI for over 52 years. He loved going up to the Upper Peninsula with his wife and 5 children to the cabin that his brother-in-law, Joe built with his brothers’, Steve and Mike. He loved his family and would do anything for them. He was a great provider for his family and worked very hard. As far back as we can remember, he loved taking whoever wanted to go out for a burger, pizza or corned beef every Saturday. He wanted to keep the family close. Preceded in death by his father Thomas Andrew Mager I, mother Elisabeth Mager-Luther, siblings Marie and (Joe) Kosuth, Betty and (Gene) Kosmal, Gin and (Chuck) Nemeckay and Ron Mager.

Gerald Joseph Mager Sr. was born on August 2, 1931 and was 89 years of age. He peacefully passed away with God's grace on March 23, 2021. He was a beloved husband to his wife Marion Mager, they were married for 67 years. He was a loving Father... View Obituary & Service Information

The family of Gerald Joseph Mager, Sr. created this Life Tributes page to make it easy to share your memories.

Send flowers to the Mager family.