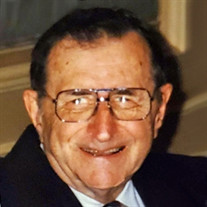 SIMPSON, FRED RAYMOND passsed away May 31, 2021 at the age of 97. Fred was born August 31, 1923 in Detroit, Michigan. Beloved husband of the late Mary (nee Rossi) for 70 years. Loving father of Dr. David and Dr. Anne Simpson (nee Pawlak) and Paul and Emily Simpson (nee Biafora). Proud grandfather of Patrick James Simpson, Fen (Paula Renee) Simpson and Charles Audette III & Francis and Catherine Simpson (nee Garvey). Great-grandfather of Logan Paul Carter, Desmond Thaddeus Audette & Sarah Cate Simpson. Dearest brother of Mary (nee Simpson) and the late Hugh Kelly, Beverly (nee Simpson) and the late Spence Hrebicek and brother-in law: Jerry and JoAnn DePew (nee Rossi). Dear son of the late Fred and the late Hazel (nee Burwell) Simpson. Fred was born in the east side of Detroit and attended Southwestern High School. He then worked at General Motors Fisher Body Research as an apprentice Tool and Die maker until called to service in WWII. He was a member of the ARMY Signal Corps through the duration of the war in Europe before transferring to the ARMY Air Corps. Following his discharge, he returned to Detroit and made arrangements to meet Mary Rossi (who had written him during the war) under the Kerns clock for a New Year's Eve dinner. One thing led to another and 3 years later they were married.Fred worked for the Detroit School Board as a Stationary Engineer for 42 years. Throughout his career he continued training and achieved a Chief Engineer classification.When he had time, he enjoyed hunting and fishing. Throughout his long retirement he enjoyed traveling, reading, discussing current events and playing cards (especially cribbage). He most enjoyed the time spent with his grandchildren and later his great-grandchildren. He never missed an opportunity to tell a story regarding past family members and pass along some wisdom learned from the times before electricity and running water on the farms. The circumstances of his early life prevented him from pursuing his dream of teaching but he continued to learn new skills and gain knowledge through numerous training and education courses. (These included everything from HVAC plant operations to furniture upholstery to woodworking to painting.) His emphasis of education inspired others to build on their abilities to raise themselves up and pursue their own dreams. Visitation Friday 3-8pm. Funeral Saturday 11:00am at Wujek-Calcaterra & Sons 36900 Schoenherr at Metro Parkway (16 Mile). Click here for Livestream of 11:00am Funeral Service: https://youtu.be/CuHafyddWlo and cemetery service https://youtu.be/8PGx69fABGY In lieu of flowers, please consider donating to the Carmelite Monastery of St. Therese located in Clinton Twp, MI. or the Angela Hospice Care Center in Livonia, MI. Entombment Resurrection Cemetery. Share memories with the family at their "On Line Guest Book" @ WujekCalcaterra.com

SIMPSON, FRED RAYMOND passsed away May 31, 2021 at the age of 97. Fred was born August 31, 1923 in Detroit, Michigan. Beloved husband of the late Mary (nee Rossi) for 70 years. Loving father of Dr. David and Dr. Anne Simpson (nee Pawlak) and... View Obituary & Service Information

The family of Fred R. Simpson created this Life Tributes page to make it easy to share your memories.

Send flowers to the Simpson family.