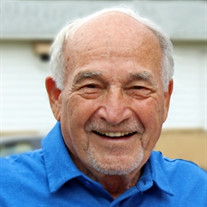 MARELLA, FRANCIS J. 'FRANK" Died peacefully Sunday, May 2, 2021 surrounded by his family, after a long struggle with illness. Frank was born in Tower Hill II, Pennsylvania, on April 16, 1934. He married the love of his life, Barbara (DiLuzio) Marella on June 12, 1965 and was married until her death in October 2016. Frank was never happier than when he was with his family and is survived by his three daughters, who were the pride and joy of his life: Lara Sucharski (Frank), Carisa “Cari” Bohley (Jim), and Jennifer; his four grandchildren: Andrew Sucharski, Matthew Sucharski, Joseph Bohley and Juliana Bohley; his sister Rose Betz (Ronald); his sister- and brother-in-law, Anita and Jim Fitzmaurice; many nieces, nephews and great nieces and nephews. He is predeceased by his parents, Tancredi and Sebastiana Marella; his wife, Barbara; and his siblings Celeste Lascaris, Louis Marella, Inez Marella, Medea Marella, and Phillip Marella. Frank was a veteran of the United States Marine Corps, which was a point of pride he enjoyed sharing with others. Upon separation from the Marine Corps, Frank attended California University of Pennsylvania where he was a member of the undefeated 1958 California University of Pennsylvania Vulcan football team. Frank devoted his life to the service of others. He retired from Macomb County in 1997, where he began his career as a probation officer and worked his way up to the director of Macomb County Juvenile Court and Youth Home. He enjoyed serving the public both professionally and as a member of many organizations. Frank was a member of the Clintondale Board of Education, the Clintondale Education Foundation, and served as a volunteer coach for the Clintondale Dragons Football team. He started Big Brothers of Macomb County, served on the board of directors of Care House Macomb County Child Advocacy Center and Havenwyck Hospital. He was the Chair of the Clinton Township Zoning Board of Appeals, a member of the Clinton Valley Kiwanis, and was instrumental in the formation of the Clinton Township Department of Parks and Recreation. In lieu of flowers, the family is requesting donations made to Care House of Macomb or the Clintondale Educational Foundation. Per family's request, funeral services are private. A memorial service will be planned at a later date. Share memories with the family at their "On-Line Guestbook: @ WujekCalcaterra.com.

MARELLA, FRANCIS J. 'FRANK" Died peacefully Sunday, May 2, 2021 surrounded by his family, after a long struggle with illness. Frank was born in Tower Hill II, Pennsylvania, on April 16, 1934. He married the love of his life, Barbara (DiLuzio)... View Obituary & Service Information

The family of Francis J. Marella created this Life Tributes page to make it easy to share your memories.

Send flowers to the Marella family.