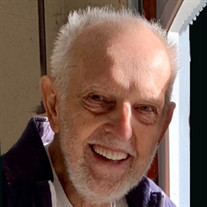 Donald “Don” Martin Watchowski of Shelby Township, passed away on Friday, June 18, 2021 at the age of 82. He was born on August 13, 1938 in East Detroit, Michigan, to Martin and Martina Watchowski. Don had endless energy and an unparalleled work ethic. He owned Shelby Temperature Control and enjoyed assisting people with their heating and cooling needs even into his most recent months. He was also a retired sheet metal worker from Ford Motor Company where he met colleagues who became lifelong friends. Family was the most important thing to Don. He was married to the love of his life, Mary, for 43 years. He was the best dad anyone could ask for—he never missed a baseball game or a dance recital and would drop everything to help his kids or anyone else who needed it. Don loved being involved in his church and community. He was an active member of the Polish Century Club, the Knights of Columbus, the St. Kieran Ushers Club, and the Shelby Parks and Recreation Committee. Don also loved spending time at his cottage in Port Austin playing putt-putt and eating ice cream with his grandkids. Don had a heart of gold and a unique sense of humor that will live on in those who knew and loved him. Beloved husband of Mary (Francis). Loving father of Michael (Deborah) Watchowski, Kelly (Christopher) Bronski, Donald (Nikki) Watchowski. Adored grandpa “Pa” of Luke and Reagan Bronski. Don is also survived by many loving nieces, nephews, and cousins. Visitation Tuesday 3-9pm with a 7pm scripture service at Wujek-Calcaterra & Sons (Shelby Twp.) 54880 Van Dyke @ 25 Mile Rd. Funeral Wednesday, instate 9:30 a.m. until time of Funeral Mass 10 a.m. at St. Kieran Catholic Church 53600 Mound (Btw 24 & 25 mile Rds). Don will be buried at St. Michael Catholic Cemetery in Port Austin, MI. Share memories with the family at their "On-Line Guest Book" @ WujekCalcaterra.com. In Lieu of flowers, the family requests donations be sent to the Prostate Cancer Foundation at www.pcf.org.

The family of Donald Martin Watchowski created this Life Tributes page to make it easy to share your memories.

Send flowers to the Watchowski family.