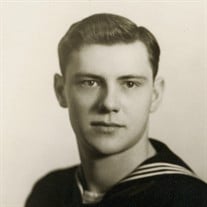 Our father, Donald Edmund Reske was born to Henry Reske and Catherine (Danielski) Reske on May 5th 1925…the last of ten brothers and sisters; May, Clara, William, Henry, Arthur. Mildred, Sylvia, Catherine and Monica in a house on Illinois Street, in Detroit Michigan… At the age of seventeen young Donald enlisted in the navy, trained at Great Lakes Naval Base and was assigned to a special mission in Alaska where ships and marine ordnance were being transferred to the Russian Navy in secret prior to the U.S. entry into World War II. Upon the end of the war our father returned to Detroit and took classes at U.of D. Soon thereafter he met a nursing student by the name of Virginia Zywiol. They fell in love and were married and here we, their children, enter the picture. Donna Kay was firstborn, named for dad’s mother. Then came David Francis, named for mom’s father. Fourteen moths later Daniel Henry, named for dad’s dad, was born and all seemed quite quiet for a while…dad took a job with Chrysler and worked at the new plant in Centerline. The family moved from the house on Hamburg in Detroit to a brand-new home on Pattow in the new town of Roseville. After a few years respite Debra Joan was born named for mom’s mom. Then came Douglas Arthur, named for dad’s brother Art…fourteen months later and Donald Edmund junior was born…. We all lived together happily in the little cape cod on Pattow…Dad built a huge play area with ropes to swing and oil drums to roll and a small log cabin play house…and then there was the pool, twenty-four feet around and four feet high. When dad installed it, mom referred to his efforts as “swearing it in”. In 1963 a great gift came to all of us; Dawn Elizabeth was born. So tiny and so spoiled by mom and dad and her six siblings, just as the baby of the family should be. And so, we lived in security of our parent’s love. As the children left home and married and had children of their own. Dad took particular delight in his grandchildren…It was Sarah, his first grandchild who called him Pucky and so he was known from that moment on. His delight was rewarded abundantly. Dad is survived by: Donna and John Stone Sarah and Frank Truss and their children, Emily, Nathan and Charlotte. Donnie and Kristyn Stone and their children, Abby, Jacob and Katie. David Reske and Tom Salas Dan Reske (wife Pam deceased) (Adrian and Drew who died young) Justin and Jennifer Reske and their boys, Jude and Jeffery. Meaghan and Matt Schock and their girls, Skyler and Sophia Danielle Reske and her son Nicholas Debbie and Steve Ziolkowski Jason and Ashley and their boys Braden, Parker and Colton Joy and Mike Luckino and their children Jack, Dominic and Elle Douglas Reske Doug Jr. and Abby with Cam and Charlie Don Jr and Debbie Reske Dawn and Craig Pomaville Olivia and Brad Janer with their children Georgina and Benjamin. When Dad could no longer take care of Mom on his own, they moved in with Debbie and Steve where they all cared for Mom until her death …Dad stayed on with the Ziolkowskis until the stairs became too much for him to climb. That’s how Dad came to live with DJ and Debbie on the river…they took great care for him right up until the end. He died peacefully in the place he thought of as home with all seven children having been with him at the end. He is and will be greatly missed by his children and their spouses and his grandchildren and great grandchildren. When at last my lover beckons, I will follow where love leads me beyond familiar borders beyond the edges of my time. I will bid a fond farewell to all I’ve known and all I’ve treasured; hold my breath for but a moment ‘til my lover’s breath is mine.

Our father, Donald Edmund Reske was born to Henry Reske and Catherine (Danielski) Reske on May 5th 1925&#8230;the last of ten brothers and sisters; May, Clara, William, Henry, Arthur. Mildred, Sylvia, Catherine and Monica in a house on Illinois... View Obituary & Service Information

The family of Donald Edmund Reske created this Life Tributes page to make it easy to share your memories.

Our father, Donald Edmund Reske was born to Henry Reske and Catherine...

Send flowers to the Reske family.