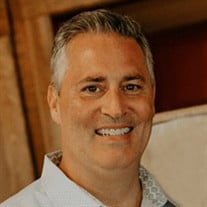 COLLIER, Donald Robert. May 7, 2022. Age 49. Beloved husband of Carey. Loving father of Alexis (Jacob), Lauryn and Jordyn. Dearest brother of Bob (Jackie), Lori (Rick) Jaehn, Lisa (Gary) Anetrini and the late Michael (Lora). Adored son of Sharron and the late Donald. Preceded in death earlier this year by his dear friend Brian "Bear" Vesnaugh. Don was the life of the party. If you were around him, it meant you were having a great time. He was the one that was always planning the trips to Las Vegas, bbq’s, holidays and loved having family and friends over for pool days and tiki bar nights. His life was always about making sure everyone had the best time. He worked hard from a young age and after graduating from Wayne State University with a bachelor’s degree in accounting and finance, he started working for Arthur Anderson. After a few years he decided to change career paths and became a successful salesman in the field of information security for ISS, then VeriSign, before finding a home at Solutionary. He continued his success and eventually became the Senior VP of sales at NTT Security (formally Solutionary). A few months ago he started a new position in the same field with Deloitte. Don was loved and respected by so many that worked with him and for him. Many of his co-workers became lifelong friends of his. He was the most driven and competitive person you knew. Whether it was a round of golf, a game of cards, a fantasy football matchup, he had one goal, to win. The thing that mattered to him the most though, was his family and friends. He was the best father, husband, brother, son, uncle and friend. He was happily married to his wife of 20 years, Carey, who he loved deeply and did everything with. When he met Carey he instantly was head over heels and everyone could tell this relationship was different for him. Carey had a daughter of her own, Alexis, who Don immediately fell in love with and took the role of her father figure. He was always so proud of how caring she was for people and her love for animals. Later, Don and Carey welcomed kids of their own, twin girls. Don was never more proud or happy than when he was talking about his twins, Lauryn and Jordyn, who are now following in his footsteps and enrolled at Grand Valley State University and majoring in accounting. Recently they accepted internships and Don could not stop boasting about how proud he was, and rightfully so. This is a loss for everyone that ever had the opportunity to meet Don. He was the rock of the Collier family. The person you could call for anything at anytime. He was the most honest, caring, hardworking and fun person you could ever hope to meet. If there was one thing we can take from this loss, it’s how he lived his life. Everyone who met him is a better person for knowing him. He will be missed everyday, but would want us to live our lives as he did, with love, passion, honesty and a drive for his family and friends that was unmatched. Visitation Thursday from 3-8pm at Wujek - Calcaterra & Sons Inc., (Shelby) 54880 Van Dyke at 25 Mile Rd. Instate Friday from 11am until the time of 11:30am Mass at St. Peter Catholic Church, 95 Market St, Mt Clemens. Interment, Resurrection Cemetery. In lieu of flowers memorial contributions can be made directly to the family which will be going towards Lauryn and Jordyn's 529 College Fund. Please share memories with the family at their "On - Line Guestbook" at WujekCalcaterra.com

The family of Donald Robert Collier created this Life Tributes page to make it easy to share your memories.

Send flowers to the Collier family.