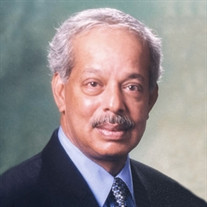 Devasia Vattakanal Thomas of Detroit, Michigan passed away on March 12, 2022 at the age of 77. Supported by his loving wife Annamma, Devasia fought a courageous battle with Parkinson’s Disease and died peacefully with family by his side. Devasia was born in Pala, Kerala India in May 1944 to father, Chandy Devasia and mother, Thresiamma Devasia. One of nine children, Devasia grew up as a creatively-motivated & outspoken member of his family, as well as his academic & religious communities. A student at Kerala Veterinary College and Research Institute, Mannuthy, Trissur under University of Kerala India, he graduated in 1969 with a Bachelor of Veterinary Science and Animal Husbandry. After his education he started his own veterinary private practice in Pala, Kerala before entering government service. In February 1973, Devasia married Annamma Ittiavira at St. Dominic’s Church in Mundankal, Pala Kerala before immigrating to the United States later that year. Devasia became highly active within the South-Asian communities of the greater Detroit-area & across the US through his membership & participation in cultural organizations, The Kerala Club & Federation of Kerala Associations in North America (FOKANA). Serving in various executive roles across the 1970-90’s in The Kerala Club, Devasia was in many ways a creative pioneer utilizing his ability in the arts to inspire the hearts & minds of his fellow Keralites. Devasia was most alive when presenting an Onam speech in traditional Malayalam, writing/acting in dramatic plays, or art directing visual art including native kathakali & tableaus of the rich Kerala backwater landscapes for various cultural events. Devasia faithfully served his community, supporting not only his fellow colleagues, but also allocating tremendous support for the youth interested in the arts and cultivating their own emerging creative aspirations. Devasia was preceded in death by his parents, Chandy Devasia & Thresiamma Devasia, by his brother V.D. Andrews, and sisters Sr Ambrosia & Sr Theophine. He is survived by his loving wife Annamma Thomas; son and wife Rome and Nina Thomas, son and wife Chris and Avni Thomas; granddaughter Naya Devi Thomas; sisters & brothers Sr. Ida, Lelamma Sebastian, V.D. Joseph, Sebastian Devesia, Celine Kochuparampil, Tom Sebastian. Visitation: Wujek-Calcaterra & Sons (36900 Schoenherr Rd. Sterling Heights, MI 48312) ● Thursday March 17th 4-8pm ● Friday March 18th 4-9pm with a 7pm Sharing of Memories Funeral Mass: St. Faustina Catholic Church (14025 Twelve Mile Rd Warren, MI 48088) ● Saturday March 19th 12:15 pm with mass beginning promptly at 12:30pm Livestream: ● For all those unable to attend in the US and abroad, the Sharing of Memories Service will be livestreamed Friday at 7pm (EST) with the following link, https://youtu.be/EX85i27uMB0 and the Funeral Mass on Saturday at 12:15pm EST will be livestreamed with the following link, https://youtu.be/88Hl3hgXu3Y. Share memories with the family at their "On-Line Guestbook" @ WujekCalcaterra.com For those attending physically, please mask at your discretion given COVID-19 protocols. People wishing to honor Devasia can make donations to support Parkinson’s Disease research at www.parkinsons.org

Devasia Vattakanal Thomas of Detroit, Michigan passed away on March 12, 2022 at the age of 77. Supported by his loving wife Annamma, Devasia fought a courageous battle with Parkinson&#8217;s Disease and died peacefully with family by his side. Devasia... View Obituary & Service Information

The family of Devasia Vattakanal Thomas created this Life Tributes page to make it easy to share your memories.

Devasia Vattakanal Thomas of Detroit, Michigan passed away on...

Send flowers to the Thomas family.