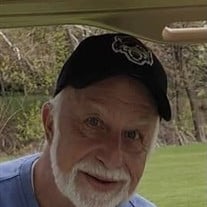 Charles “Chuck” Stephen Kozlowski, 69, of Clinton Township, passed away on Wednesday, September 1st, 2021. Cremation rites have been accorded, and a celebration of life will be announced at a later date. Chuck was born October 18th, 1951, in Detroit, Michigan, to parents Theresa (nee: Alfred) and Martin Kozlowski. Chuck is survived by his brothers, Jerome (Cathy) and Michael (Diane); sons Brian (Adrianne) and William (Erin); his grandchildren Emilia, Jocelyn, Eleanor, and Steven; and honorary grandkids, Rachel and Jessica. Chuck is preceded in death by his parents; his brother, Ralph Kozlowski; and his eldest son, Charles Martin Kozlowski. Chuck worked for Detroit Edison for thirty years, where he ultimately retired. In his retirement, Chuck became a globetrotter. He traveled extensively, experiencing new cultures and food. Chuck never met a stranger - he took enormous pleasure meeting new people and trying new cuisines. Chuck was an avid golfer and loved playing the sport. Chuck was particularly thankful for his friendships with Larry Iwanicki and Dennis Abraham and the games and conversations they shared. You knew Chuck liked you if he gave you a good ribbing. Chuck was in a long-standing ‘feud’ with a family friend about whether or not Die Hard was a Christmas movie and proclaimed Golden Oreos to be impostor cookies. Chuck was an avid Detroit Tigers fan and loved working on puzzles with his family. Chuck’s greatest pride was in his children and grandchildren. He lived his life with zeal and reveled in sharing the joys of friendship and family with everyone he met in his travels. The world has truly lost a kind and gentle soul in Chuck. He will always be loved and dearly missed by the many hearts he touched. In lieu of flowers memorial contributions in Chuck's honor are appreciated to the American Cancer Society (https://www.cancer.org/involved/donate.html) or the Salvation Army (https://www.salvationarmyusa.org/usn/ways-to-give/).

Charles &#8220;Chuck&#8221; Stephen Kozlowski, 69, of Clinton Township, passed away on Wednesday, September 1st, 2021. Cremation rites have been accorded, and a celebration of life will be announced at a later date. Chuck was born October... View Obituary & Service Information

The family of Charles Stephen Kozlowski created this Life Tributes page to make it easy to share your memories.

Send flowers to the Kozlowski family.