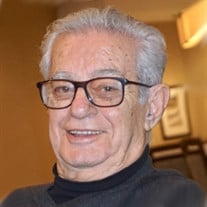 ZIKOS, Anastasios K. April 6, 2021. Age 94. He is survived by his wife Kasiani; Daughters: Martha, Nia [son-in-law Dimitrios] and Dina; Grandchildren: Angela [Nick], Kasie [Tom], Stavros [Shannon], Katerina [Mike], Evelyn [Tony] and Ereni; and Great-grandchildren: Taso, Athena, Melina, Eleni, Elias, Lucas, Effie, Zoe and Maria. He is proceeded in death by son-in-laws Nonda and Jerry. To the world he was a stoic, honest, generous man. Steadfast in his faith. Always with a smile on his face and a story to share or a joke to tell. To his family, they will each tell you he was “the best man I’ll ever know”. He was a husband, father, grand father, and a great grandfather. A hard worker who did everything to put his family first. The patriarch of a family, dominated by women. Yet somehow he always kept his composure, never raised his voice, and never liked it when we did. He was emotional. And sweet. Never too proud to cry or tell you how he felt. And patient beyond comprehension. He was the kind of man that would barricade a road for the woman he loved. Literally, he did that. The respect and fierce love he showed his wife every moment of their relationship is something only emulated in the movies. They held hands until the end, shared a single couch cushion and were partners in every sense of the word. He taught us all what pure, unwavering unconditional love truly meant. One of the best things about him was the way his face would light up when someone stopped by the house to visit. As if he had been waiting for you all day and that just seeing you made him the happiest person alive. Because it did, and he was. Being in the presence of his family brought him so much joy, his laugh and smile were contagious. Now, that doesn’t mean he wasn’t without his faults. We understand that before the grandkids came along he was the typical strict Greek father, held his daughters to the highest of standards and allegedly even had a temper. He was also known to sneak a Marlboro Light or two back in the day. But he grew finer with time. Stronger and more resilient from one year to the next. To all of us he seemed super human. As if he would live forever. And he always seemed like he wanted to. He didn’t want to miss a single moment. And after nearly 95 years, 3 kids, 6 grandkids, 9 great grandchildren, countless graduations, engagements and weddings, career milestones, basketball and hockey games, dance recitals and theater performances, you could say he saw a lot. But he was not entitled and never took a single one for granted. He made the most of every day that was given to him and counted his blessings daily. He lived a life full of love, laughter and prayer. The epitome of a good man. His memory will most definitely be eternal as we all try to live up to his legacy. In lieu of flowers memorial contributions are appreciated to Race for Immunology (www.RaceForImmunology.org). Please share memories with the family at their "On-Line Guestbook" at Wujek-Calcaterra.com

The family of Anastasios Konstantinos Zikos created this Life Tributes page to make it easy to share your memories.

Send flowers to the Zikos family.